A Hike, Some Tea and a Meal.

Today in the News:  It was a good weekend.  We're almost at 50 followers.  Remember, whn we hit 50, we're going to have a gear give away for followers only!  If you like this blog, please click "follow".  If you ever have an idea for a guest article, email me at house.of.howes@hotmail.com .

Link of the Day:  http://kingstonlounge.blogspot.com . Not much to do with bushcraft, but man, this person is a great photographer and covers old delapidated sites.  Love it.  Check it out.

A Hike, Some Tea and a Meal

Between work and family commitments, I'm not able to get out into the bush much at this point in my life.  I have the oompa-loompas who are just getting large enough to enjoy such things.  Mrs. Hotel is always game, but often has work weighing her down at home as well.  Due to it being a long weekend here in the States, we decided to get out and hike, especially since the temps were around 40 degrees F.  Mrs. Hotel planned on a walk into the woods, but Mr. Hotel, as usual, had more elaborate plans.

There is one thing that I love more than anything else.  Tea in the woods.  Doesn't even have to be tea.  Could just be a hot drink in the middle of nowhere on a cool day.  I usually take honey and cream in my tea, but when I'm hiking, I like it black.  The simplicity of it relaxes me.

So when Mrs. Hotel wasn't looking, I packed my stove, kettle and some cups into our back pack.  I also threw in a can of pasta and grabbed a piece of wire out of the shed.  She was none the wiser, but did complain that the pack seemed heavier than it should be.  Between my gear and everything me needed for the oompas, it was.  My trick?  I had a plastic sled and two inches of snow.  That makes a heavy load lighter.

We hiked awhile and reached a beautiful little gully.  I hung the pack and began to set up.  The oompa loompas were ready for some play time and play they did. 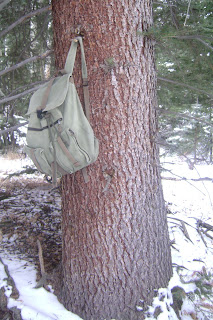 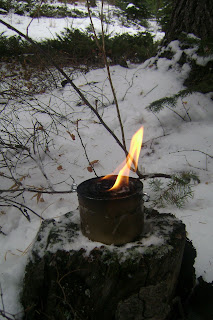 I found a stump and lit up the little camp stove.  I was on private land and didn't have permission to have a full-on campfire, but this worked out quite well. 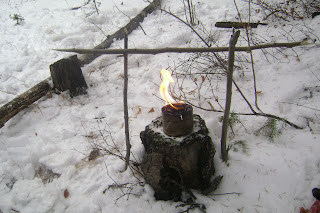 I made a tiny version of my winter kitchen.  The ground beneath the snow was still soft and I drove in my two "Y" sticks. 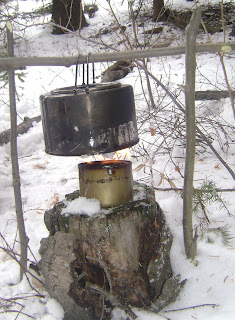 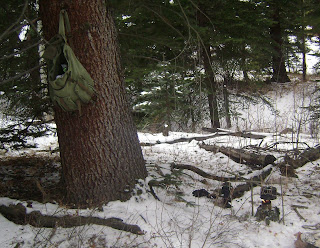 This is what I like about the little stove.  Here it is, lit, on the right side of the picture.  It really is tiny and doesn't emit a lot of smoke.  A few people walked by on the trail (we were about 50 feet off to the side) and they didn't notice it.  Hardly and smoke and a flame small enough to hide behind a bush.  The other thing I decided that I liked about the stove is that it is waterproof, to a point.  I dropped it face down in the snow and because of the wax, it still lit just fine. 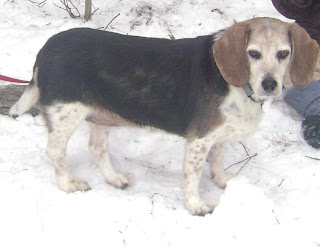 This is our decrepit old beagle-mutt.  We never bring her along, but decided to today.  She didn't regret it and neither did we.  She has a bad back leg because she was hit by a car when she was a year old.  She's 11 now and going gray in the face.  None of that slowed her down today, which is quite abnormal for her.  Sometimes I'll walk her around the block.  I try to do a second round and have to let her off the leash when we pass the house the first time.  I keep walking and she runs up the road, sits on the porch and waits for me to come back. 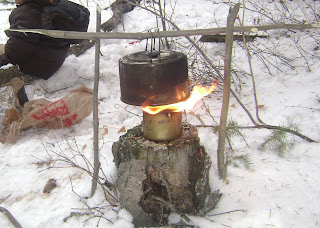 I could hear the water boiling..... 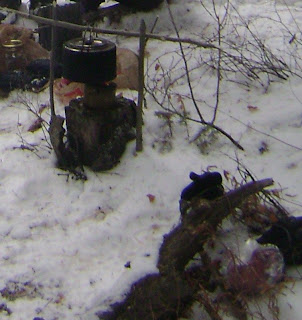 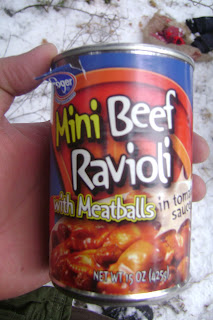 I decided to cook some ravioli as well.  Mrs. Hotel doesn't usually allow such things in our diet, but we were on the trail, where the rules are always different. 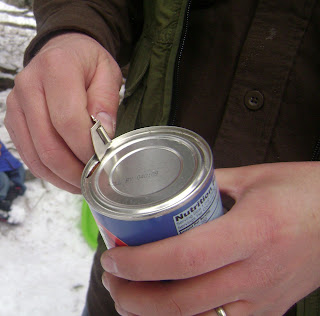 Here I am using my p-58 can opener.  I like the p-38 better.  Believe it or not, this thing is razor sharp and pretty big.  I've made it through airport security many times with it in my wallet.  Makes you wonder what they really catch. ;) 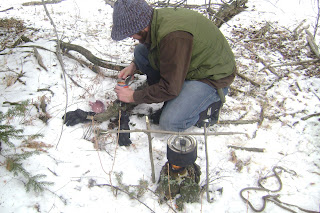 I had a piece of wire that I snagged out of the shed.  It came in handy.  I put two holes in each side of the ravioli can. 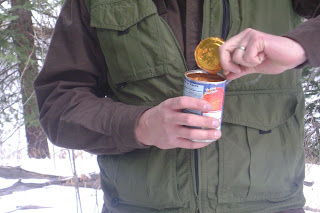 Can't really see it here, but I'm rigging the wire to the can. 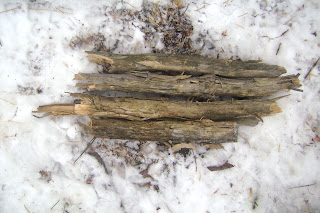 Here is my makeshift tea cozy.  I was about to take the tea off the stove and put the ravioli on.  I didn't want the tea to get cold sitting it on the snow-covered ground. 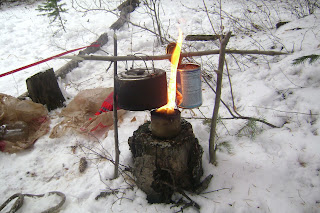 I wanted to see if the mini-kitchen would hold both the kettle and the meal.  It did. 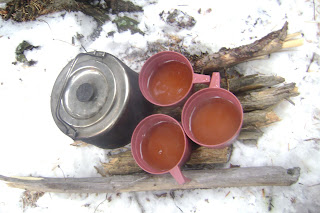 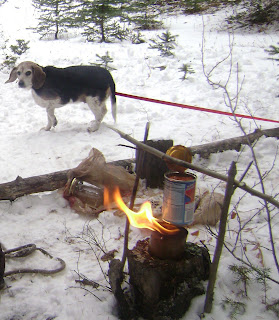 The mutt smelled the ravioli and it was all I could do to keep her from burning her nose on the fire. 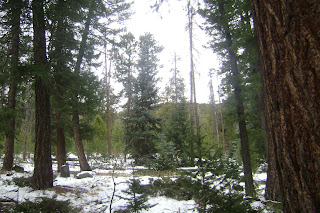 While the ravioli were cooking, I took a walk.  Colorado has an amazing wilderness.  The thing that astounded me the most when I moved here is how little under brush there is.  In Maine, you're usually fighting to see five feet in front of you.  I could walk through this for days.  Next time, we'll get even further off the trail. 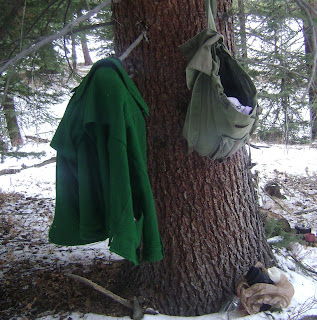 I was getting sweaty.  With the temp at 40 degrees, I decided to ditch the coat for a bit. This a great coat.  Johnson Woolen Mills.  Uncle Bern gave it to me years ago and he had it years before that.  It is sturdy.  Though it is thin, it is still quite warm. 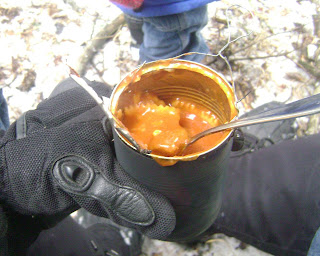 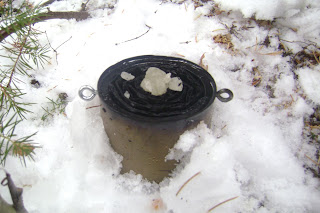 When we were done, we blew the stove out like a big candle.  I stuck it in the snow for a minute to cool, then put the lid on and put it back in my pack.  We cleaned our site, checked twice for things left behind and hit the trail. 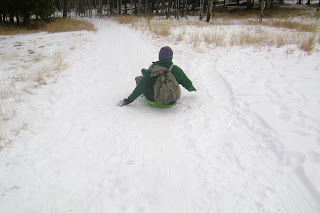 The coolest part?  Most of the hike to our spot was uphill.  So on the way back, we loaded all of our stuff into our plastic sleds and went sliding.........almost all the way back to the car!
Pax Domini Sit Semper Vobiscum,

Comments
If you see something on the site that you're interested in purchasing, email me at house.of.howes@hotmail.com.
The humans featured in the pictures are not for sale. Ever.